May the fourth be with you! Toxic algae, discharging St Lucie locks.

On May 4th our friend Katy Lewey,  river warrior, founder of the River Kidz of St Lucie and Indian River County put together a gathering so we could all be there when the locks open.

They have been open but were recently closed due to the discovery of Toxic green algae at Port Mayaca.

In the past few years we are blessed to have great news teams that show up and we show up for them.

In between, the new’s cycle we decided to take a ride to Port Mayaca to see the green toxic algae for ourselves.

When we got there we found Ben, an employee of SFWMD.  I have lots of friends who work or worked for them. Good People. Dedicated Scientists.

He was taking water samples of both sides of the locks. 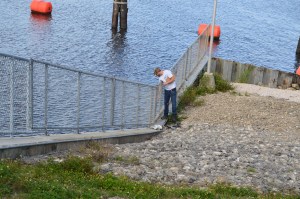 This is what we saw on the inside of the locks. 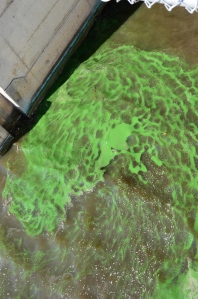 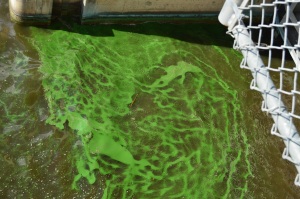 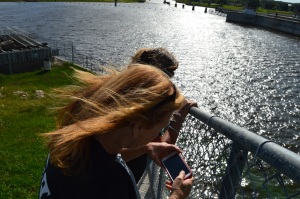 Then we went to the overpass for a nice wide shot.

you can see the green by the gates. There is also a section off to the right that is not in the photo.

I was not there last week so I have no basis of comparison but I can say the weather has been cooler and this stuff thrives on two things according to my ORCA friend and past Indian RiverKeeper George Jones : Heat and nutrients.  So I have no idea what will come next because of the the cool weather. Will it come down and just hang stagnant until it gets hot and then bloom? George said it sucks the o2 out of the water and at night it goes underwater so it just doesn’t sit on the top it goes to the bottom and it sucks the o2 thus killing everything underneath.

armful algal blooms have been observed to cause adverse effects to a wide variety of aquatic organisms, most notably marine mammals, sea turtles, seabirds and finfish. The impacts of HAB toxins on these groups can include harmful changes to their developmental, immunological, neurological, or reproductive capacities. The most conspicuous effects of HABs on marine wildlife are large-scale mortality events associated with toxin-producing blooms. For example, a mass mortality event of 107 bottlenose dolphins occurred along the Florida panhandle in the spring of 2004 due to ingestion of contaminated menhaden with high levels of brevetoxin.[8] Manatee mortalities have also been attributed to brevetoxin but unlike dolphins, the main toxin vector was endemic seagrass species (Thalassia testudinum) in which high concentrations of brevetoxins were detected and subsequently found as a main component of the stomach contents of manatees.[8]

Immune system responses have been affected by brevetoxin exposure in another critically endangered species, the Loggerhead sea turtle. Brevetoxin exposure, via inhalation of aerosolized toxins and ingestion of contaminated prey, can have clinical signs of increased lethargy and muscle weakness in loggerhead sea turtles causing these animals to wash ashore in a decreased metabolic state with increases of immune system responses upon blood analysis.[10] Examples of common harmful effects of HABs include:

so when we get upset there is good reason.

This is from the cdc.

Algae are vitally important to marine and fresh-water ecosystems, and most species of algae are not harmful. Algal blooms occur in natural waters used for drinking and/or recreation when certain types of microscopic algae grow quickly in water, often in response to changes in levels of chemicals such as nitrogen and phosphorus from fertilizer, in the water. Algal blooms can deplete the oxygen and block the sunlight that other organisms need to live, and some can produce toxins that are harmful to the health of the environment, plants, animals, and people.

When all else fails. When everyone has closed their doors to us. The legislators, the Governor’s Board of South Florida Water Management.

What choice do we have then to defend our selves and the creatures of the Indian RIver Lagoon?

4 comments on “May the fourth be with us! Toxic algae, discharging St Lucie locks. We must keep going!”