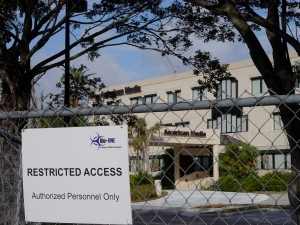 This is photo of the American Media Building after it was attacked by Anthrax.

In October 2001, after the 911 attacks, we were all working and there was a news report about someone local at American Media dying from Anthrax. The news at the time reports that Bob Stevens died from drinking water in the Carolina’s where he had been vacationing. The person that was saying this was the head of the Palm Beach County Health Department.

I was driving down Okeechobee Blvd when I got the call to come home because someone died from Anthax. I knew this wasn’t true because I had been reading about Anthrax at the DOD website. After 911 we were all so hypervigilent. I think we never thought our lives would get back to normal.

I did know this. You can’t get anthrax from drinking it in the water.

We contacted Governor Jeb Bush and he contacted who ever the head public health doctor was.

The pharmacy I worked at sold out of cipro instantly. We then sold out of doxycycline. So did everyone else. The entire area sold out of antibiotics.

At the time Dr. Jean Malecki  the head of the health department of palm beach county did not want to check for spores in the noses of other people that worked at American Media but the people who worked there insisted. I can’t remember how many but there were spores found in the noses of a few people.

I may be wrong but I believe this was the first. I do not think they ever figured out who did this but they did think it was from someone who access to weaponized anthrax. As I did my research this morning I see a lot of history has been rewritten but I have to work so I’ll save that for another day.

I can tell you this for sure. If you look closely at the photo the company name was Bio One. Bio  One was owned by Rudy Giuliani. I guess it’s a smart move to benefit financially  from the deaths of other people.

So when I talk about how we have to continue to be vigilant and call out the news this a prime example.

I will never forget how terrified I was. Not just because of the Anthrax but because of all the mistakes of the news media of the time.

So because the world is amazing a friend of mine shared this story with me. I have walked around with a lot things from when this happened and one the questions was why did we get the call to do research on this. It came from someone at AMI and I never wanted to get that person in trouble. I had some theories but I never ever ever expected this.

From my friend Victoria:

Victoria Romero Huggins It was a very scary time for me as a mother. Our daughter, Summer, sat at the desk next to Bob’s. Summer was Bob’s photo-journalist assistant. Yes, there were at least 3 others who had spores within their noses. I got the phone call from Summer when Bob died. They knew what it was, they just kept it under wraps and out of the public. Her phone call to me was: “Mom, I’m to young to die! I had Sammy in here on Saturday to do some work. Bob got the Anthrax on Friday!” Yes, there were people in the building on MONDAY swabbing everything. When they found spores on the keyboards and hand railings within the building – they sent everyone home. They were not allowed to take anything but themselves out of the building. That very day, they began swabbing the noses of the employees – some were put on cipro immediately. Summer was one of those. I sat with her every day for the FBI updates. I went through the most trying time – she had an allergic reaction to Cipro. A very bad reaction. Then, the FBI decided that since Bob and Summer lived within the same neighborhood, an approach to the Lantana Municipal Airport, they began swabbing their homes and yards. Nothing was found at their homes. We were told at least a month before the press got hold of it, that the spores were throughout the building, compliments of the A/C. It seems so strange that the AMI people were working and having daily briefings at the Sun Sentinel building in Delray, yet they were continually told “Share nothing with the press!” Everyday after briefings, the parking lot was full of TV crews…… I will say this, AMI paid their employees in cash each week, even though most of them were not working…. It was a very sad time for our family. (Now that AMI has moved out of Boca, Summer is without a job since September. She worked for AMI since she was 17 – and she is 39 now.)