So I was in Sarasota over Christmas and I took Barney for walk. It wasn’t really a walk it was more like a stop, sniff, urinate, pull sort of exercise.  It’s a good thing it was a short walk to the Bay or I may have never returned.
It was a cool area. It’s called Indian Beach/Sapphire Shores. 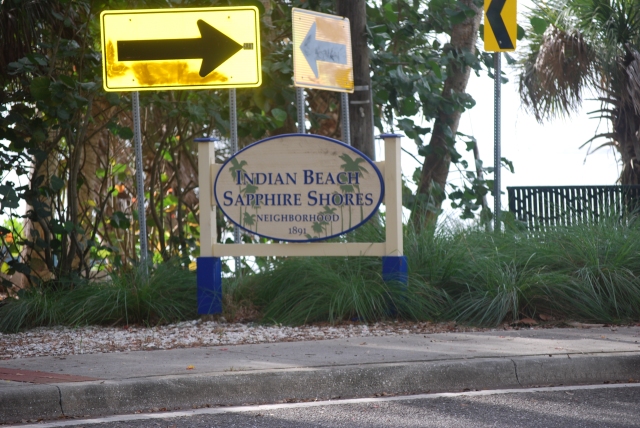 I saw this sign and I knew that my friends back in Jensen and many of my blogger friends would love this so I took a photo of it.
Maybe we can all do this together as a project and get a sign for our yards.

There’s been a lot building and destruction around us. Let’s make our yards a place where wild life can thrive. 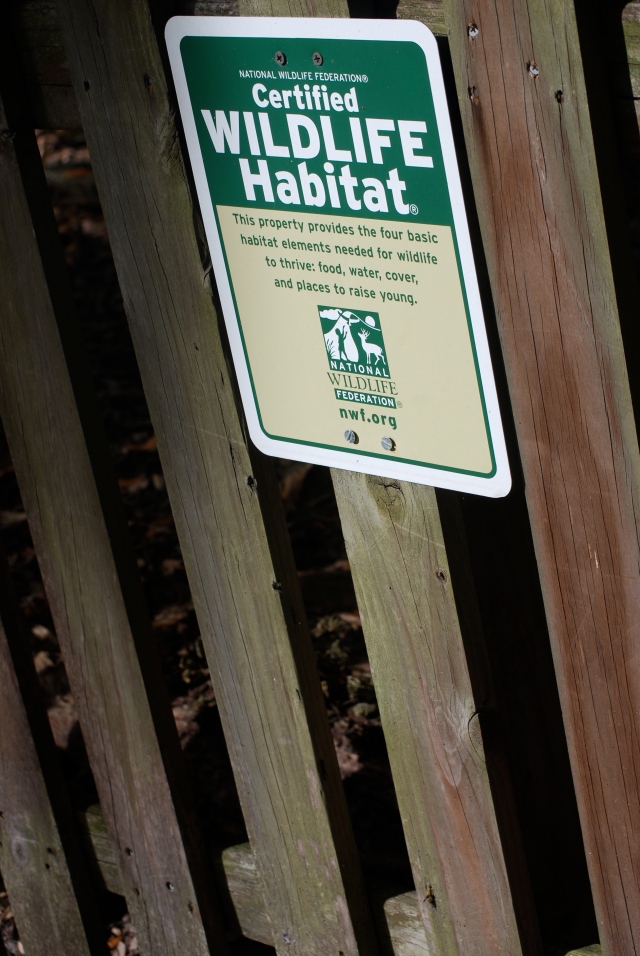 Whether you have an apartment balcony or a 20-acre farm, you can create a garden that attracts beautiful wildlife and helps restore habitat in commercial and residential areas. By providing food, water, cover and a place for wildlife to raise their young you not only help wildlife, but you also qualify to become an official Certified Wildlife Habitat®.

How to Create a Wildlife-Friendly Garden

Everyone needs to eat! Planting native forbs, shrubs and trees is the easiest way to provide the foliage, nectar, pollen, berries, seeds and nuts that many species of wildlife require to survive and thrive. You can also incorporate supplemental feeders and food sources.

Wildlife need clean water sources for many purposes, including drinking, bathing and reproduction. Water sources may include natural features such as ponds, lakes, rivers, springs, oceans and wetlands; or human-made features such as bird baths, puddling areas for butterflies, installed ponds or rain gardens.

Wildlife require places to hide in order to feel safe from people, predators and inclement weather. Use things like native vegetation, shrubs, thickets and brush piles or even dead trees.

Give Wildlife a Place to Raise Their Young

Wildlife need a sheltered place to raise their offspring. Many places for cover can double as locations where wildlife can raise young, from wildflower meadows and bushes where many butterflies and moths lay their eggs, or caves where bats roost and form colonies.

Wildlife thrives in a healthy habitat with the food sources appropriate to their ecosystem, clean water, and plants free from harmful chemicals. Practicing sustainable gardening with the use of native plants, water conservation, and not using pesticides or herbicides ensures wildlife abundance.

Once you have provided these essential elements to make a healthy and sustainable wildlife habitat, join the thousands of wildlife enthusiasts across the country who have earned the distinction of being part of NWF’s Certified Wildlife Habitat® program.

There is a lot of Hate out there but what causes it?

“If love is said to come from the heart, what about hate? Along with music, religion, irony and a host of other complex concepts, researchers are on the hunt for the neurological underpinnings of hatred. Functional magnetic resonance imaging (fMRI) has begun to reveal how the strong emotion starts to emerge in the brain.”

A neurobiologist named Semi Zeki of University College London’s Laboratory of Neurobiology led a study last year that scanned 17 adult brains as they gazed at the images of a person they claimed to hate. Across the board, areas in the medial frontal gyrus, right putamen, premotor cortex and medial insula activated. Parts of this so-called “hate circuit,”he researchers noted, are also involved in initiating aggressive behavior, but feelings of aggression itself—as well as anger, danger and fear—show different patterns in the brain than hatred does.

Hatred activates in the frontal cortex.

There is a lot more research that has to be done

“The study, by Professor Semir Zeki and John Romaya of the Wellcome Laboratory of Neurobiology at UCL, examined the brain areas that correlate with the sentiment of hate and shows that the ‘hate circuit’ is distinct from those related to emotions such as fear, threat and danger – although it shares a part of the brain associated with aggression. The circuit is also quite distinct from that associated with romantic love, though it shares at least two common structures with it.”

“A new study using MRI scans, led by Professor Jianfeng Feng, from the University of Warwick’s Department of Computer Science, has found that depression frequently seems to uncouple the brain’s ‘hate circuit.’

The study is published Oct. 4 in the journal Molecular Psychiatry.

The researchers used MRI scanners to scan the brain activity in 39 depressed people (23 female 16 male) and 37 control subjects who were not depressed (14 female 23 male). The researchers found the fMRI scans revealed significant differences in the brain circuitry of the two groups. The greatest difference observed in the depressed patients was the uncoupling of the so-called “hate circuit” involving the superior frontal gyrus, insula and putamen. Other major changes occurred in circuits related to risk and action responses, reward and emotion, attention and memory processing.

The new University of Warwick led research found that in significant numbers of the depressed test subjects they examined by fMRI that this hate circuit had become decoupled. Those depressed people also seemed to have experienced other significant disruptions to brain circuits associated with; risk and action, reward and emotion, and attention and memory processing. The researchers found that in the depressed subjects:

Professor Jianfeng Feng, from the University of Warwick’s Department of Computer studies said that:

“The results are clear but at first sight are puzzling as we know that depression is often characterized by intense self loathing and there is no obvious indication that depressives are less prone to hate others. One possibility is that the uncoupling of this hate circuit could be associated with impaired ability to control and learn from social or other situations which provoke feelings of hate towards self or others. This in turn could lead to an inability to deal appropriately with feelings of hate and an increased likelihood of both uncontrolled self-loathing and withdrawal from social interactions. It may be that this is a neurological indication that is more normal to have occasion to hate others rather than hate ourselves.”

All very interesting. The brain is a fascinating place.

This is why I love Science. There is hope for people who hate.