To ALL my friends:

I just want to give you everyone an update on this situation with this issue with actors protesting at SFWMD last week. Karen Donahue called Jason Wool to wrangle up actors to be in a piece that was suppose to be the background of a documentary for the Tea Party.  When Karen put out her add the it  said to contact Jason.  Karen spun this off for Jason to be the middle man.  People responded to Jason, because they  know him , because he is a trusted member of the acting community and frequently helps  his fellow actors get gigs.  He had recently gotten Karen a gig. So Jason thought she was just returning the favor. Fifty people were given what they thought was an acting gig. There were sag actors involved but no sag contracts. And no water was provided as required by SAG. NO WATER!

Karen will not talk to Jason. He has tried to call her and she refuses to talk to him.

But who paid the money to Everett? 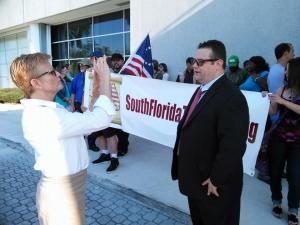 “I don’t know anything about people being paid! These are real protestors”

Everett   was brought into the meeting and greeted by a friend on the WRAC board. Who was that? And is that person who paid these guys to do this. To trick them.

You have to be a real bottom feeder to do this.

Anyone who knowingly tricks people into doing something by presenting it in a different way is truly a bottom feeder. I

Jason is now receiving nasty emails. They should not be directed at him. Please do not direct your anger at the people who were tricked.

The people you should be harassing is South Florida Water Management to get to the bottom of who hired these guys. I doubt they even care.

We demand an investigation!