To the people of Clewiston, Florida

ACOE and the Herbert Hoover Dike: We should be up in arms together!

Let’s take a moment to remember when the discharges came back in 2013 and we all went to Phipp’s Park. 7000 of us together in true Solidarity. The day most of us met each other.

That day we all heard this speech from the Indian RiverKeeper Marty Baum.

For many of us this was a call to action. For the people of Clewiston it was a call to flood them and make them float away. Of course, that’s not what Marty said. He didn’t say flood the houses. He said flood the fields and he was referring big sugars ability to keep their water at the exact height needed.

I posted that video of Marty on my old video blog on UVU which was part of WPBT2. I’m not sure what happened to UVU but I posted a lot of content there. 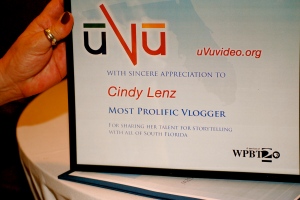 I posted Mark Perry, the video of the march to the locks, and others that got a decent amount of views. Marty’s video got 2400 views which is huge.

After the Sugarland Rally, when the people of Clewiston were accusing us of wanting to flood them I realized that probably every person in Clewiston probably saw that video. There was no explaining to them what the intention was. Their minds were set.

We heard that we HAD to have to discharges to protect the people that live south of the lake. Most of us understand that. That was 2 years ago and many millions of dollars.

Are the people south of lake any safer today than they were then?

. The levee is expected to fail. I know that sounds bad, and it is. FEMA is apparently planning to update flood assessments this summer and redraw flood maps for Palm Beach and Martin counties. These flood maps are expected to be drawn as if the levee around Lake Okeechobee didn’t exist. In other words, they are not counting on the levees to protect against flooding.

2. The Herbert Hoover Dike is in the highest failure category of the Army Corps risk scale. Current efforts are being directed at reducing the risk category, but as it stands (and even after millions of dollars worth of improvements) the levee protecting the area still carries the highest risk classification (DSAC 1) of any dam in the United States.

3. There is no emergency spillway, nor is one planned to be built. There is no good, controlled way to drain off excess water from the lake should a large amount of rain fall in a short amount of time. Lake Okeechobee fills six times faster than it can be drained, and a foot of rainfall would result in 3 to 4 feet of water rise in the lake. Current levees will start to fail when the lake rises above 18.5 feet above mean sea level (it’s at roughly 14 feet currently), and significant levee problems are almost certain to occur when the lake reaches 20 feet over MSL.

“In what appears to be a never-ending task, U.S. Army Corps of Engineers crews in Florida continue working on the outdated Herbert Hoover Dike surrounding Lake Okeechobee — the state’s largest freshwater lake. Since 2007, teams have performed various tasks to reduce the risk of dike failure due to flooding from high water levels.”

Because of the construction methods used in the 1930s, the dike is susceptible to erosion of the earthen embankment,” said John Campbell, public affairs specialist of the Jacksonville District, U.S. Army Corps of Engineers (USACE). “Over the past six years, we have installed a 21.4 mile concrete barrier known as a cutoff wall into the southeast quadrant of the dike. The cutoff wall is designed to reduce seepage and prevent erosion.”

The cutoff wall extends from roughly 6 ft. (1.8 m) from the top of the dike through the foundation to several feet beyond the limestone bedrock, averaging between 60 to 80 ft. (18.3 to 24.4 m) below the crest of the dike. It’s considered crucial to the rehabilitation effort, although is by no means a solution to a complex problem. Despite a multi-million dollar effort by USACE, the dike remains on a national shortlist of unsafe class 1 dams, with a category defined as either “almost certain to fail under normal operations” or at “extreme risk of failure with high fatalities and economic losses.” Campbell said progress has been made, but there is a long way to go.

“The $200 million invested so far made it possible to install the cutoff wall in the southeast quadrant of the dike between Port Mayaca and Belle Glade,” said Campbell.

TWO HUNDRED MILLION DOLLARS and the people are no safer than they were two years ago.

People of Clewiston you should be up in arms! 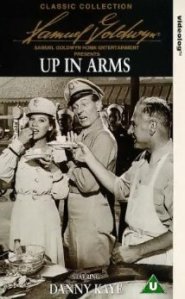 We should be up in arms because as long as this is the case our discharges will never stop.

We should be up in arms together.

Here are some photo’s I took from the car as Julie and I whizzed by last weekend. 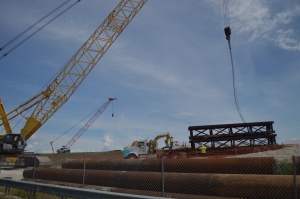 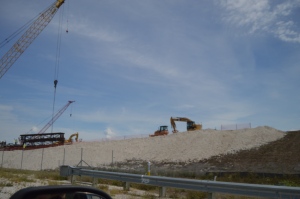 There was one spot that looked like a giant sand bag. Not a lot of confidence going into hurricane season.

The reason I bring this up is because our campaign to build a reservoir ended with discharges and toxic green algae sightings and it felt like what went around came around and we were back to square one with the ACOE. The people south of the lake are still in grave danger.

Don’t you think that having a reservoir south of the lake would take some pressure off those dikes and help to keep those people safer?

So just a note to the folks out in Clewiston. If you want to be upset with someone be upset with the ACOE and be upset with your bosses at big us sugar corp who are against anything that will keep you safe.