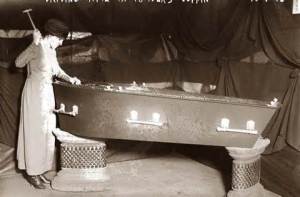 Nail in the Coffin.

Board member Kevin Powers of Stuart made the motion to “irrevocably” terminate the option to buy 46,800 acres of U.S. Sugar land by Oct. 12. The motion was approved unanimously.”

“The deal, set to expire in October, had been fiercely championed by environmentalists as the best option for storing water from Lake Okeechobee. They envisioned the land being used to ease pressure to release polluted water into the St. Lucie and Caloosahatchee rivers, allowing water managers to instead hold it until it could be moved south to Florida Bay. Parts of the bay have become far too salty, killing sea grass that provides critical habitat for marine life and driving down the number of sea trout, a fish used to measure the health of the bay.”

There are really and truly constraints out there. For me, the biggest one is financial,” said board member Sandy Batchelor.”
This is what Eric Draper had to say about her when she was reappointed
http://audubonoffloridanews.org/?p=12233

“During her service Sandy has always put the Everglades first. She does her homework, is careful with tax dollars, and shows up to make the right decisions. Governor Scott made the right call.”

Apparently, she has never heard of Amendment One.

“Our frustration comes from the fact that you do not have a Plan B,’’ said former Martin County Commissioner Maggy Hurchalla. “You keep telling us what we can’t do, not what we can do.”

Well this is it isn’t it. This entire time we’ve been going no one from SFWMD has ever suggested what they would do about the issues.