by Darcy Flierl
I can’t express the strangeness of knowing my daughter calls her step mother “mommy” more than I can express the emotion provoked by this occurrence.  When I’m found in the same vicinity as my daughter and her younger half-brother, she introduces me as her “other mommy”.  The whole experience of my daughter having another mother has been a mood challenging event to say the least and has afforded me the opportunity for reflection and self-growth.  Yay Me! Not!
Self growth isn’t easy and it doesn’t feel real great.  Sometimes I have to grin and bear the emotional pain until I find the right coping skill to get through the uncomfortableness of it all.  You never know what life event can throw you into a tail spin.  The complexities of your daughter having another-other mommy- presents a multitude of issues that extend beyond what this other woman is called. 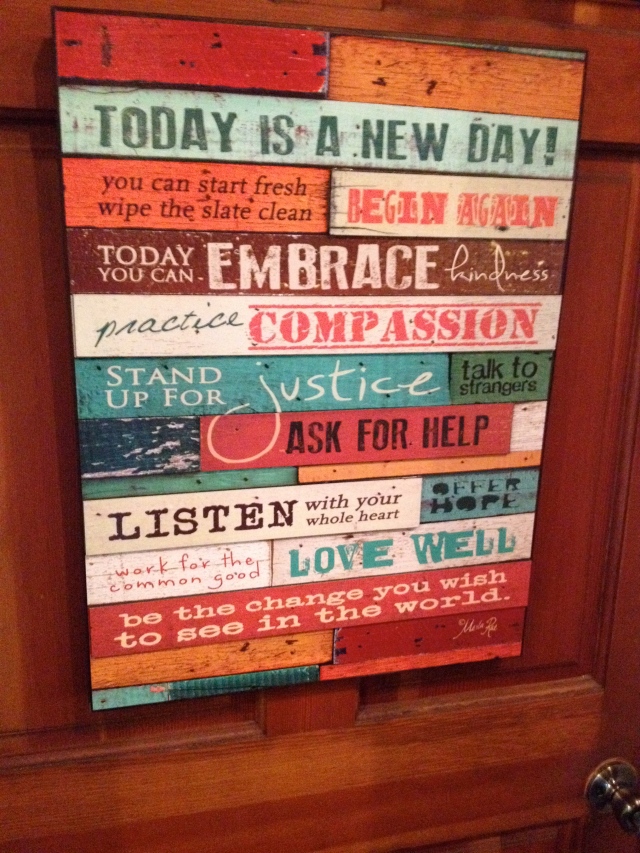 When getting a divorce, it is natural to think about what kind of effect your x’s new partner might have on your child. Mostly, you hope the new influence will be a positive one.  In my mind, this woman was going to be a friend to her; an extra loving adult that would listen to her, support her and ultimately step aside and let me and her husband, parent our child in the way we always had, like “business as usual”.  I lacked the foresight to consider the fact this extra parental figure was going to have opinions about my parenting, scheduling needs to be considered, or that financial decisions concerning my daughter would concern her.  My daughter did get the type of step mother I wanted for her.  I, however, was not emotionally prepared for the negotiating, the opposition, and the resistance that would become a common way of “doing business” with the other side.
It’s been a battle of the wills, two families, one common daughter- with both sides willing to fight till the bitter end.  I’ve come to learn that this war creates long term, chronic stress that is detrimental to everyone’s well being.  Yet, the disagreements, lack of commonality and cooperation linger from year to year.  I’ve given up hope that harmony and understanding will ever be cultivated.  I had to come to accept that I wanted my child’s dad and “other mommy” to trust me as a parent, to respect me as her mother, and allow me to parent my only child the way I had always dreamed and the way I had, pre-divorce.  Once I accepted what I was truly fighting for, I then had to let it all go.  I say that like it was easy or as though it’s been accomplished.  In fact, it’s a constant process of letting go.
A few nights ago I watched the movie Hector and the Search for Happiness, in which a psychiatrist goes on an international traveling expedition to understand the meaning of happiness.  One insight Hector achieved was, “Avoiding unhappiness is not the road to happiness”.   I spent a lot of time thinking about this concept.  My most recent co-parenting coping skill has been to avoid contact at all cost.  Of course, avoiding is not a viable option when your daughter spends 10 days a month with her “other family”.  It occurred to me that I’ve been confusing acceptance with avoiding.  I’ve been preaching detachment and acceptance to my clients as well as personally using this framework, long before I became a Mental Health Therapist.   Understanding the philosophy and experiencing it are two distinctly different things.  My emotional reaction to certain stimuli is proof I have not yet mastered this idea called, Acceptance.
All the latest research as to how to manage depression and anxiety is shining the light on something called Mindfulness Based Cognitive Therapy.  The theory, developed by Philip Barnard and John Teasdale in 1991, states the mind as two main modes that include a “doing” and “being” mode.  The “Doing” mode drives us towards our goals and is bothered when things go differently than how we believe they should.  The “Being” mode doesn’t care so much about our goals but focuses on accepting and allowing circumstances without the need to change anything.   The level or degree of emotional dis-ease is based on which mode the individual primarily relies.  For good mental fitness, Barnard and Teasdale say that the goal is to achieve something they call Metacognitive Awareness (MA).  MA is the ability to experience negative thoughts and feelings as mental events that pass through the mind, rather than as a part of the self.  This is detachment and acceptance in action! There is finally research behind what Buddhist and Mystics have known for centuries; to separate oneself from one’s own thoughts and opinions in detail is to not be harmed mentally and emotionally by them.  In short, human suffering is a result of our attachments.
The reality of co-parenting post-divorce is not at all what I had envisioned in my divorce fantasy.  It turned out that the things that caused me so much upset are events that I didn’t predict.  There was only so much “prevention” I could have done to decrease my discomfort to the life changes.  Sometimes I’m able to maneuver the conflict was confidence, ease and even a glimmer of grace (The Being Mind).  Other times, I’m defensive, thoughtless and reactionary (The Doing Mind).  I’ve been fairly successful tapping into my Metacognitive Awareness at different times in my life where the discomfort is sudden and quick.    The ongoing conflict of co-parenting with another family in which there is so much discord, is like being exposed to a continuous state of trauma.
I’m mindfully aware of just how much I can’t stand the fact that another woman is indirectly making major decisions effecting my daughter that range from health, religion, and behavior, beliefs and life experiences, based on her value system.  It’s unlikely that one day I will wake up and be happy about the fact I have to battle to parent my own child.    Here lies the opportunity for self growth…..I don’t have to like it, I just have to accept it.  I have to accept that my daughter has an “Other Mom” who has different ideas and will attempt to impose these ideas and at times, she will succeed.    My “being” mind says, “It is, what it is”.  It doesn’t mean I give up being the mom I dreamed of being, rather it means giving up the divorce dream of how I thought it should be.  It means that I acknowledge that the “other mom” has provided a rare opportunity to master becoming a mindful mom.

If you would like to learn more about mastering your mind as part of the divorce recovery process, please contact Darcy to learn about upcoming workshops.  Email at darcy.flierl@gmail.com

Darcy Flierl is a Licensed Clinical Social Worker, Certified Addictions Professional, and Certified Yoga Teacher currently offering individual and family psychotherapy in Stuart, Florida.  She also enjoys teaching in the Human Services Department as an Adjunct Instructor for Indian River State College and is Consultant for Non Profits along the Treasure Coast.

She has held board positions on for a variety of local and statewide agencies from the Department of Juvenile Justice’s State Advisory Group to CHARACTER COUNTS! and others.  Darcy has received a variety of awards for her community work such as;  Soroptimist’s Rising Star Award, the Community Champion Award from the United Way and for community advocacy from the Tobacco Free Partnership and was a 2013 Nominee as a Woman of Distinction.

Besides working to make Martin County a healthier place, she donates her time doing River Advocacy for the Indian River Lagoon and raising awareness about many issues effecting young people and families.  She treasures her time with her husband, and children attending local events and enjoying Martin County’s recreational opportunities.

For more information about Darcy you can visit her website at:  http://www.darcyflierl.com