Here are some Ghostly Treasure Coast facts that I found.

“I live in the sugar hill subdivision of Jensen Beach Florida in the 3600 block of sugar hill ave. Behind my house is a cemetery with graves dating back to the 1800s. One night I was in my pool in the backyard at dusk.
I looked through my screen and saw a small child peering at me in my pool. The child appeared to be about 6 or 7 years old. A little girl in a white and blue school dress with shiny black shoes. I was startled.
I looked again and she was gone. A few days later I saw her again. She was wearing the same clothes standing by the screen holding a small knife. I freaked out and got my husband. He ran out to the pool and just as he got outside she vanished and the knife dropped to the ground.

We went over to the screen and she had used the knife to cut a long vertical slit in the screen. It was a warm evening but it was very cold where she was standing. I picked up the knife and brought it in the house.
The next day I went in the kitchen to get the knife and show it to my neighbor but it was gone. My neighbor in sugar
hill too had seen the same little girl who mysteriously vanishes. A few days later I saw her again and I bolted out after her.
She ran through my backyard and ducked under my fence running into the graveyard. She ran across the cemetery and then vanished. When I walked over to where she vanished there was a grave there of a girl born 1921 and died 1929.

She died from scarlet fever. Needless to say I put my house up for sale. The ghosts of sugar hill live on…”

Here  are some of the spooky things that have happened in nearby cities and towns.

Port St Lucie: Everybody has heard of the infamous Devil’s Tree here in PSL, where two girls were sadistically murdered by an insane police officer in the 60s. He hanged them from the tree and left them there for dead.

.
Palm City: On Bessey Creek there is said that a girl around 10 disappeared rowing her fathers rowboat, if you go there at midnight you will see her….

The Leach mansion was built in 1936 when the leach family first moved to the area. The building was purchased by the Florida Institute of Technology in 1972 but closed down in 1986, the property stood vacant for over a decade until it became the site of Indian River Side Park with the first phase opening to the public in 2001. It remains as such to this day.

There are many ghost story’s about the mansion, some tales of hauntings include, extreme cold spots in the hallways, and huge amounts of orbs throughout the building. Also shadows of people have been seen in all areas of the building when there has been no one there.

The auditorium is said to be one of the most haunted areas, reports of piano music and the sound of a young boy singing are experienced frequently.

One unique report from this location is when entering through the double doors a very strange feeling can be experienced, it has been described by some as feeling like entering another world. The other most common report is to experience the feeling as if your being watched, some have claimed to feel the presence of another person, as if they were being followed around the building.

http://www.ghostsofamerica.com/3/Florida_Stuart_ghost_sightings.html
“I often hear of this bloody wedding dressed woman around here. I live here and am going to find out about her.”
Submitted by Itsasecret

“Comment by Dlr: In the early 80s my brother and I saw a bloody lady in a white dress walking down the road in Golden Gate. I went up and asked if she was OK and she just kept walking. I turned to my brother who was in a ditch and turned back and she was gone! I forgot about this until I read your post! I was 8 at the time and my brother was 10 and we were outside playing army with the neighbors! Got chills when I read your post!.” 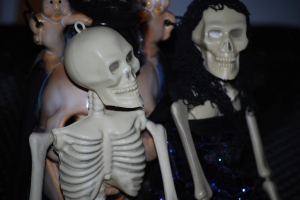 http://theshadowlands.net/places/florida.htm
check it out. These are some place’s that are said to be ha
Jensen Beach

Vero Beach
http://www.ghostsofamerica.com/3/Florida_Vero_Beach_ghost_sightings.html
I was staying at the Driftwood with my son and some friends we heard it was haunted so at 12 went outside to look at the beach it was completely dark. We saw a shadow that looked like Waldo Sexton (the founder of the Driftwood) then we went back to bed and heard creeks and footsteps. All night the kids couldn’t sleep; if you want to stay in a haunted hotel here it is.
Submitted by Nancy
I was staying with my three cousins overnight (and they lived in like the middle of nowhere). I had heard stories of someone being buried in the woods behind there house (not by them) but I never believed them.
One night one of my cousins left the room to get something. I looked out the window and looked out onto the dock (which was well lit) and I saw a dark human like figure standing there. It’s eyes were blood red.
It stayed like that for almost an hour until it just faded away. By far the scariest thing in my life.
his actually happened a number of years ago and I’d almost forgotten about it. I was walking briskly on a dirt road before the area became very built up as it is now. I reached the end of the road and gazed off into the field which was actually a citrus grove and then suddenly I heard the noises of people’s voices speaking rapidly in hushed tones, and then when I looked up again there was no grove but I saw a tall Native American woman walk by me very briskly carrying a basket of what appeared to be food and she actually looked at me.
It seemed that she was actually looking through me and didn’t really see me standing there. I could see her face very clearly and she appeared to be frightened of something. There were many people running, all of them appeared to be natives wearing native type clothing, but most were fairly tall.
There was something green on the woman’s shoulder but it happened so fast it was hard to make out what it was. As rapidly as it happened the whole scene disappeared and the citrus grove was there as it had been before.
Submitted by Charlene”
http://www.ghostsofamerica.com/3/Florida_Sebastian_ghost_sightings.html
“My parents moved us here to Sebastian where we purchased a house in a mostly deserted community. We have repeatedly witnessed a ghostly black dog in the house. I keep hearing footsteps on the stairs at night.
On one night while staying up late reading I heard my door creak open. I looked back and it wasn’t our cat. Then all of the sudden it slammed shut. After that one night we went on a walk. I saw a face with bright yellow eyes and with blood on it in the brush along the road.
I was scared as we walked home and want to move back where we came from but my parents insist we stay here.”

If you have any good spooky stories let me know.