By the time they are done with this they will spinning it upside down and inside out.

Florida Water and Land Conservation Initiative, Amendment 1 (2014)‬
The Florida Water and Land Conservation Initiative, Amendment 1 was on the November 4, 2014 ballot in the state of Florida as an initiated constitutional amendment, where it was approved. The measure was designed to dedicate 33 percent of net revenue from the existing excise tax on documents to the Land Acquisition Trust Fund.
The Land Acquisition Trust Fund was developed to acquire and improve conservation easements, wildlife management areas, wetlands, forests, fish and wildlife habitats, beaches and shores, recreational trails and parks, urban open space, rural landscapes, working farms and ranches, historical and geological sites, lands protecting water and drinking water resources and lands in the Everglades Agricultural Areas and the Everglades Protection Area. The fund was designed to manage and restore natural systems and to enhance public access and recreational use of conservation lands.
The campaign in support of the initiative was led by Florida’s Water and Land Legacy.
It passed with 74.96%

I think that’s pretty clear and not up for debate. Let me repeat this again.

“Sen. Alan Hays, a Umatilla Republican who is chairman of the subcommittee, said the state might already have enough land within its preservation inventory. ”

““They have done everything that they can to shift agency expenses into the Constitution,” Draper continued after the meeting. “If they could find a way to pay for the towels in the executive washrooms with Amendment 1 they did it.”

“Hays said the will of the voters is “open to interpretation” and that he’s been flooded with email and phone calls from people claiming the state doesn’t need to buy more land.”

Really Senator Hays. This ok with your constituents? 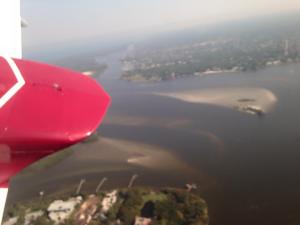 I have to doubt that the people of

Umatilla, Nature’s Hometown, is located in northern Lake County, Florida and offers many outdoor activities such as boating, fishing, camping and hiking.

said that. Only because I spend a great deal of time on water of Lake County and have taken 100 of photos of the Dora Canal. I know the people there. They love their water and their nature and I’m sure they do not want  our water, our indian river lagoon to look like the photo above.

“President Andy Gardiner.
The legislative leaders expressed confidence lawmakers will agree on measures that backers of the amendment will support.
“When we look at water policy, we’re really interested in that oversight, and that oversight not just on water policy but Amendment 1 as a whole,” said Gardiner, R-Orlando. “We think it’s very important that the voters that supported Amendment 1 know that decisions are being based on critical need.”
Really? We have critical need. I don’t know whats more critical than stopping this.

and finally my favorite article of the morning

http://flaglerlive.com/76153/land-protection-dt/
Because this really is a kick in the face to the voters.
“Problem is, Republican legislators are acting as if that’s some sort of tree-hugger’s wish list, rather than the law of the land.”
“Then late this week the Senate comes out with initial budget recommendations that outraged mainstream environmentalists and threatens to make a mockery of Amendment 1 goals — and of anyone who still believes this Legislature is sincere about implementing this amendment as intended when passed into law.
The bottom line there is that the full amount of money intended to be used for land acquisition needed to achieve the law’s goals is not being appropriated. There are all kinds of confusing details to sort through, and a ton of legislative legalese being spread around to explain the massive shortfall. But rather than salve on a wound, it feels like salt. It feels like a betrayal.
Why would the legislators do this? Forget their explanations and rationalizations. Most of them are simply caving in to Big Sugar and Big Agriculture, hungry eyes on campaign contributions to come, and already banked. Can you say, “Quid Quo Pro”?”

Ignore the Death Mermaid at your peril

Back in 1881, she appeared to Hamilton Disston, warning him against trying to drain the Everglades. Old Ham, never the most emotionally stable of multimillionaires, shut his eyes tight and swore on his mother’s grave he’d stop drinking cologne.

In 1969, she scared the feds into killing the Everglades Jetport, a project beloved of South Florida Democrats. It would have been the largest airport in the world and bang in the middle of the Big Cypress Swamp.

Last week she materialized at the South Florida Water Management District meeting, urging the water czars to stop screwing around with the Everglades.

You’d think they would listen to a skeletal apparition with long green hair (probably from all that toxic algae gagging Florida waters) and a tail. But these are Rick Scott appointees: they don’t believe in mermaids – or measurable water standards.

One comment on “Florida Legislature Steals Amendment One Money”