I love Hanukkah because it’s the holiday  of miracles and lights.

Light conveys both an absence of darkness and a quality that will help us to see — and understand — more clearly.

I feel like we all need lot’s of light right now.

A civil war and oppression from the west. Sound familiar?

The Story of Chanukah

“The story of Chanukah begins in the reign of Alexander the Great. Alexander conquered Syria, Egypt and Palestine, but allowed the lands under his control to continue observing their own religions and retain a certain degree of autonomy.  Under this relatively benevolent rule, many Jews assimilated much of Hellenistic culture, adopting the language, the customs and the dress of the Greeks, in much the same way that Jews in America today blend into the secular American society.

More than a century later, a successor of Alexander, Antiochus IV was in control of the region.”

He was waging war against Egypt and there was a rumor going around that he had died.

“The deposed High Priest Jason gathered a force of 1,000 soldiers and made a surprise attack on the city of Jerusalem. Menelaus was the High Priest appointed by Antiochus, but he was forced to flee Jerusalem during a riot. The King returned from Egypt in 167 BCE, enraged by his defeat, and he attacked Jerusalem and restored Menelaus, then executed many Jews.

When these happenings were reported to the king, he thought that Judea was in revolt. Raging like a wild animal, he set out from Egypt and took Jerusalem by storm. He ordered his soldiers to cut down without mercy those whom they met and to slay those who took refuge in their houses. There was a massacre of young and old, a killing of women and children, a slaughter of virgins and infants. In the space of three days, eighty thousand were lost, forty thousand meeting a violent death, and the same number being sold into slavery.

Antiochus decided to side with the Hellenized Jews in order to consolidate his empire and strengthen his hold over the region. He outlawed Jewish religious rites and traditions kept by observant Jews and ordered the worship of Zeus as the supreme god (2 Maccabees 6:1–12). This was anathema to the Jews and they refused, so Antiochus sent an army to enforce his decree. The city was destroyed because of the resistance, many were slaughtered, and a military Greek citadel was established called the Acra.

He began to oppress the Jews severely, placing a Hellenistic priest in the Temple, massacring Jews, prohibiting the practice of the Jewish religion, and desecrating the Temple by requiring the sacrifice of pigs (a non-kosher animal) on the altar. Two groups opposed Antiochus: a basically nationalistic group led by Mattathias the Hasmonean and his son Judah Maccabee, and a religious traditionalist group known as the Chasidim, the forerunners of the Pharisees (no direct connection to the modern movement known as Chasidism). They joined forces in a revolt against both the assimilation of the Hellenistic Jews and oppression by the Seleucid Greek government. The revolution succeeded and the Temple was rededicated. 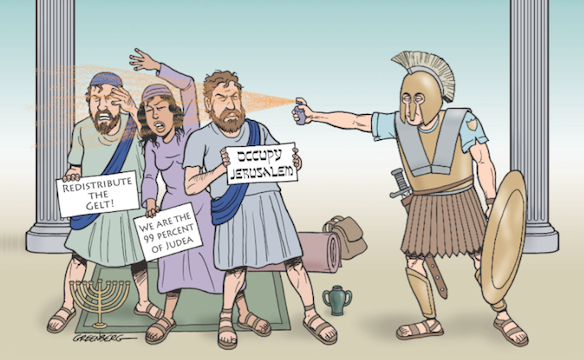 According to tradition as recorded in the Talmud, at the time of the re dedication, there was very little oil left that had not been defiled by the Greeks. Oil was needed for the menorah (candelabrum) in the Temple, which was supposed to burn throughout the night every night. There was only enough oil to burn for one day, yet miraculously, it burned for eight days, the time needed to prepare a fresh supply of oil for the menorah. An eight day festival was declared to commemorate this miracle. Note that the holiday commemorates the miracle of the oil, not the military victory: Jews do not glorify war.

Even way back then there were war mongering  power hungry wing nuts.

Who was Judah Maccabee? (by Rabbi Shimon Apisdorf)

The Greeks were different from other empires. They didn’t just want your land, your resources and your riches — they wanted your national essence, your culture. They wanted you to think like them, live like them and even be entertained like them. The problem was most Jews weren’t buying, and the Greeks didn’t appreciate that. So the Greeks brought pressure to bear on the Jews.

Women who insisted that their sons be circumcised were killed along with their babies. Brides were forced to sleep with Greek officers before they could be with their husbands. Jews were required to eat pork and sacrifice pigs to the Greek gods. The teaching of Torah became a capital crime.

The sages and their students went into hiding in order to study and preserve the Torah. Secret weddings were held. Most Jews did anything and everything to remain Jewish. Many were tortured and murdered for their defiance. A period of darkness and suffering descended upon the Jews of Israel.

The Hasmonean family was led by Mattisyahu and his five sons: Shimon, Yochanan, Yehudah (Judah), Elazar and Yonasan. Mattisyahu was a devout man who could not bear to see Judaism and the Jewish spirit crushed. It was his family that led the revolt against the vastly superior Greek forces. Mattisyahu understood that the battle was far less for national liberation than it was for spiritual and religious liberation. Though Mattisyahu’s valor provided the initial spark for the revolt against the Greeks, he died shortly after the rebellion grew into a full-fledged war. The mantle of leadership passed from Mattisyahu to his son Judah, and with that the course of history was forever changed.

Judah Maccabee was a fearless leader, a brilliant battlefield tactician and a man capable of inspiring thousands to take up arms in the battle for the preservation of Judaism. It was Judah Maccabee who conceived of ways for the Jewish forces to out-maneuver the larger, better equipped and seasoned Greek army. When at last the Jews captured Jerusalem, rededicated the Temple and witnessed the miracle of the oil, it was with Judah Maccabee as the leader of the Hasmonean family and at the head of the Jewish army of liberation.

The Jewish rebellion was a great event in Jewish history, but tragically, the war against the Greeks was also a civil war. Not all Jews sided with the Maccabees, who to some represented “the past.” Many Hellenized Jews aligned themselves with “progress” and with the future. As a result, Jews battled with one another for the right to define the future of Jewish life and the Jewish nation.”

A tradition of the holiday is playing dreidel, a gambling game played with a square top. Most people play for matchsticks, pennies, M&Ms or chocolate coins. The traditional explanation of this game is that during the time of Antiochus’ oppression, those who wanted to study Torah (an illegal activity) would conceal their activity by playing gambling games with a top (a common and legal activity) whenever an official or inspector was within sight.

A dreidel is marked with four Hebrew letters: Nun, Gimel, Hei and Shin. These letters stand for the Hebrew phrase “Nes Gadol Hayah Sham”, a great miracle happened there, referring to the miracle of the oil.

The letters also stand for the Yiddish words nit (nothing), gantz (all), halb (half) and shtell (put), which are the rules of the game! There are some variations in the way people play the game, but the way I learned it, everyone puts in one coin. A person spins the dreidel. If it lands on Nun, nothing happens; on Gimel (or, as we called it as kids, “gimme!”), you get the whole pot; on Hei, you get half of the pot; and on Shin, you put one in. When the pot is empty, everybody puts one in. Keep playing until one person has everything. Then redivide it, because nobody likes a poor winner.

Chanukkah, Oh Chanukkah
Come light the menorah
Let’s have a party
We’ll all dance the hora
Gather round the table, we’ll have a treat
Shiny tops to play with, latkes to eat

And while we are playing
The candles are burning low
One for each night, they shed a sweet light
To remind us of days long ago

God made the sun and it shines for everybody. Ziggy Marley

Here’s is a cute short funny version of the story.

this video is great (Neis is the miracle) Let’s be the light this year. Let’s all be the Hanukkah miracle.

5 comments on “Happy Chanukah-It’s all about the Neis”